A huge success to be repeated soon. Scroll down to listen to this show. 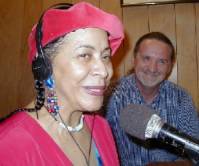 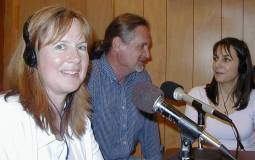 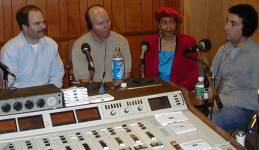 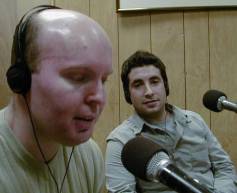 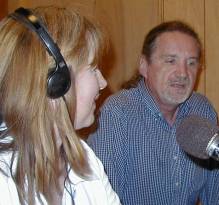 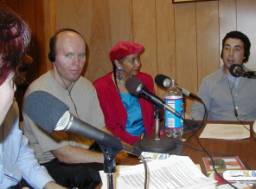 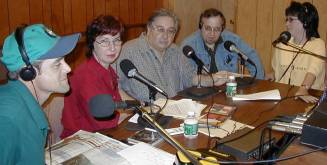 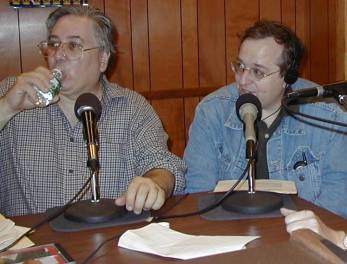 “Luigi Pirandello:  His Price for Passion”

JOHN MARTELLO is the current executive director of The Players, the oldest theatrical club in the country.  As an actor, John has studied with Wynn Handman of the American Place Theatre and Jose Ferrer.  He has appeared off-Broadway in “The Killer Thing” directed by Otto Preminger and his one man show “Damon Runyon’s Tales of Broadway.”  As a producer, he was nominated for an Outer Circle Critics Award for his revue “Daugherty & Fields Off-Broadway” at the Double Image Theatre.  He recently appeared in the premiere play reading of Joyce Maynard’s “To Die For” and the film “Chaining the Hudson.”

PHIL MARSHALL is a two time Emmy Award-winning documentary filmmaker.  His films include:  “NYTV:  By the People Who Made It,” “The Other Islands of New York City” and “Chaining the Hudson.”  He was the Executive in Charge of Production of “Molly’s Pilgrim,” which won the Oscar for best short subject for 1986.  He will be directing (as well as co-producing) “Luigi Pirandello.”  He is a member of the Directors Guild and is considered an expert in digital production techniques.

MAIRE MARTELLO attended The London Academy of Dramatic Arts and studied acting with Stella Adler and John Strasberg.  As an actress she has appeared off-Broadway in “Waiting for Godot” and “Right You Are If You Think You Are” with Rue McClanahan and Dominic Chianese.  With the Black Box of Asbury Park she produced Pirandello’s “The Man with the Flower in His Mouth” and the Women’s Playwright Festival, directing its first Equity production of Arlene Hutton’s “Last Train to Nibroc.”

“Luigi Pirandello:  His Price for Passion” is a PBS film about the life and career of the great Sicilian playwright.  “Soprano’s” star Dominic Chianese will portray Pirandello and read from his letters and plays.  Incorporated into this documentary is a twenty minute feature film version of “The Man with the Flower in His Mouth.”  It will star John and actor Barney Martin (Seinfeld’s father on “Seinfeld”).  It will be filmed in eastern Sicily and Palermo.

Pirandello was the Nobel Prize-winning author of “Six Characters in Search of an Author” and “Henry IV.”  He is considered Italy’s greatest playwright.  But it was his association with Benito Mussolini and the Italian Fascist Party during the 1930s that damaged his international reputation.  “His Price for Passion” will explore his controversial politics as well as his long playwriting career and tumultuous personal life.

As Executive Director of the inaugural Garden State Film Festival, a non-profit organization, Diane Brown Raver brings over 25 years of experience in the festival, film and television production industries.

Before founding the Garden State Film Festival in the fall of 2002 Diane was instrumental in the creation and execution the first International Family Film Festival in Manasquan, New Jersey in the spring of 2002.  While overseeing all aspects of the project, including raising funds, attracting celebrities and sponsors, and working closely with members of the local theater, townships and the partnering film festival representatives, Diane became the pivotal point person around whom the festival revolved. From screening films to securing name talent, from producing the workshops to ensuring children had appropriate entertainment.   Due to her solid relationship with members of the film community, the people of the Jersey Shore, and, most importantly, corporate sponsors, the Festival enjoyed a socially and financially successful launch.

Diane also founded two companies, The Madison Group and Proximity Films, serving as the president & executive producer for both organizations. At both companies Diane was responsible for all commercial production, the strengthening of the domestic sales organization, the creation of a worldwide sales organization and the inception of a live action commercial production company.   Diane was also instrumental in the development of extensive relationships with commercial film directors, and marketing and sales representatives. Diane was responsible for the completion of projects for such clients as Citibank, Hershey, 7-Eleven, General Ford, Proctor & Gamble, 7-Up, and AT&T.

In addition, Diane has extensive experience in sales management and all stages of the production process, from pre-production through post production and actualization.

Kyangazi Denson was born in Ft. Lauderdale, Fla., and is Single with no children, seeking her Soul Mate.  Her Penn Name is MS Shangazi Sunshine, which means "A Gift from God."  Kyangazi is an Educator, Poet, Documentarian, Humanitarian, World Traveler and Recent Candidate for City Council and School Board.

While attending Stony Brook University, she earned a BA in Psychology in 1974 then continued on to Columbia University to get a MA in Special Education in 1975.  She also attended Union Theological Seminary from 1978-79 as a licentiate of the African Methodist Episcopal Church under the leadership of Rev Owens, Bethel AME, Asbury Park, NJ.

Kyangazi began her life as a Documentarian photographing on location during her world travels.  First, as an Exchange Student in 1970 she continued traveling through to 1989 to exotic places learning "taxi languages to communicate" while documenting ordinary people over coming environmental and economic barriers in their lives.  Places like Martinique, Barbados, Granada, Morocco, Spain, Jamaica, England, Kenya, Paris, Mexico, Egypt, Israel, Japan, Taiwan, and China.

Kyangazi published her first 10 Political Satires in 1988 in the "American Poetry Anthology."  She dedicated and delivered her Poems to President Reagan, one entitled "3 Bad Men," describing her writings as "in Storybook form for oversimplification and communication of complex issues of today."  Others poems can also be viewed on line at: Poetry.Com under the Poet's Name, Kyangazi Denson.

Today, Kyangazi is the Producer of a 30 minute weekly television show with hopes of returning to the classroom in September to teach "Broadcast Television" in the Asbury Park School District.

"MSPTV," MS Shangazi Presents: Issues and Answers, is the Longest Running Community Events Program from Asbury Park on Cablevision's Public Access Television with over 500 shows in the MSPTV Library.  In Keeping with the theme, documenting ordinary people doing extraordinary things to overcome barriers, the Residents of Asbury Park have Entertained, Enlighten and Educated Monmouth County on television since 1992.

Cell
David D’Alessio
Currently works for InDiGent(Tadpole,Chelsea Walls,
Tape Final, Personal Velocity) prior to this he was
at Open City Films(Three Seasons) and its digital division
Blow Up Pictures(Chuck-N-Buck,Series 7,Lovely and Amazing).
While at Open City Films/Blow Up Pictures
David worked on a number of projects including "The
Guys" starring Sigourney Weaver and Anthony LaPaglia,
which was acquired for North American distribution at
the 2002 Toronto Film Festival by Focus Features for
release in December 2002, and "The Assassination of
Richard Nixon" starring Sean Penn which is in
Currently in production. Prior to working at
Open City Films, he was the assistant to Donna Gigliotti
former President of Production at USA Films, where he
was involved in the production of
Robert Altman's "Gosford Park" Neil Labute's
"Possession", and Robert Evans' "The Kid Stays in the
Picture". Prior to working at USA Films, David was
Director of Development at Rebellion Pictures, a small
independent production company in New York and before
going to Rebellion he was a development assistant at
Ira Deutchman's company Redeemable Features.Ý

Bob Mataranglo is a full time Instructor of Fine Art at Monmouth University and Adjunct Professor at Brookdale and Ocean County Community Colleges. He teaches a variety of studio courses as well as Art History. He has earned an MFA in Digital Video, an MA in Painting, and an MS in Engineering (from a previous life). His art work includes painted sculpture which has been exhibited throughout the area, several large public murals, and most recently, Videos, which have appeared at numerous film festivals throughout the US and Canada over the past year.

A 2 time Clio award winning television commercial and network cable promo
producer, Doug was the producer for an Emmy nominated PBS documentary for
"Alive TV." He has produced and production managed over 200 national
televisions commercials for some of best directors in the industry including
a 17 year stint as NY production supervisor for Joe Pytka (TV commercial
world's most heralded director - Pepsi/ IBM / "Space Jam").
Doug has produced episodes of the award-winning comedy series "Pulp Comics"
which aired on Comedy Central in the late '90's as well as award winning
corporate films for Pfizer Pharmaceuticals. He has produced TV commercials
with Susan Lucci, Tiger Woods, Dennis Leary, Woody Allen, etc. including the
series of spots for New York City after 9/11 featuring Henry Kissinger,
Woody Allen, Kevin Bacon, Al Roker and Ben Stiller. He has been the Director
of the Asbury Shorts Show of New York for 24 years presenting award winning
short films in New York City, Washington, D.C., Philadelphia, Lake Placid,
Long Island, London and Berlin. He's looking forward to bringing the show to
Asbury Park this summer.

for Best Picture at the Ajijic (Mexico) International Film Festival;

Festival his feature film Minimal Knowledge. The film was also selected to be

Market in New York. He has been commissioned to produce several shorts

including The Reluctant Samaritan and Watch Out.

He produced several award-winning short films including The Drowning (Student

A Wonderful Wallet, When The Walls Are Bare, Getting Bleak, Watch Out,

Reluctant Samaritan, and True Blue. He received on-screen credit and thanks from

the producers of the acclaimed features Welcome To The Dollhouse (Winner, Grand

Festival) , Getting To Know You (Nominee, Sundance Film Festival), Six Ways Till

Since 1985, David has worked for the New Jersey Motion Picture and

Television Commission. He is currently the Commission's statewide Production

Coordinator/Associate Director. Under David's guidance as Production Coordinator at

the Film Commission, VARIETY ranked New Jersey 5th in the country in the

the 4th best job in State of New Jersey working at the Film Commission.

In conjunction with Greg Corrado, David devotes his time, talents, and

treasury to raise funds for the local Adult Literacy Program.

Terry is currently in the middle of post-production on HAIR OF THE DOG, a 30 minute psychological thriller for Producer/Writer Tim Clark.

WASHINGTON ROAD has also been selected to be in The Urbanchillers Fear Zone. This will be a television series of thirteen half hour shows showcasing movies made by filmmakers from around the world currently playing on Urbanchillers.com.

Terry is the President of Manta Ray Pictures, a company that represents all his work. He grew up in Seattle, Washington. Terry started out by making 25 amateur music videos, which progressed into professional music videos for artists like Michael Knight and Voodoo Storm. Terry studied with the American Film Institute, New York University and HB Studios. The short films Terry has made are Madame Red (1990), Double Fantasy (1994), Sarah (2000), Washington Road (2001), Help Me (2002) and Hair of the Dog (2003).  Terry made the feature film drama called Out Of Touch (1995), as well as directing two episodes "The Downfall of Johnny Garrett" and "Stalk" in the horror anthology film Evil Streets (1998). Terry writes for Fearsmag.com, was the Senior Writer for Guitar 2001 Magazine and has contributed to Shock Wave Magazine, Rue Morgue Magazine and Metal Edge Magazine.  To learn more visit his website www.mantaraypictures.com