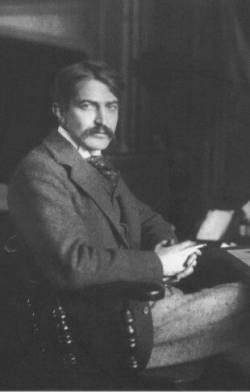 Dedicated to the memory of Stephen Crane 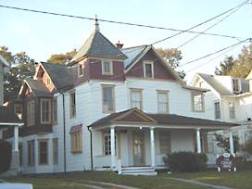 Stephen Crane, author of The Red Badge of Courage and other works, lived with his family in this house on Fourth Avenue for nine of his most formative years. The home, now a museum and performance /entertainment space, is an active part of the community, hosting readings, plays, and even classic movies. (Please scroll down for latest feature and history, below.)

"Here I Stand" -- an extraordinary documentary from PBS about the life and struggles of New Jersey's own great genius, Paul Robeson.

At 4 pm we will screen the 1999 documentary about Paul Robeson's amazing life, including his constant persecution by the U.S. government.

For those who wish to remain, at 6:30, we will screen a copy the 1936 film that stars Paul Robeson: "Showboat". (NOT the Technicolor '51 MGM version, but the film directed by James Whale--director of the first two Frankenstein movies! Others in the great cast are Irene Dunne, Allan Jones, Helen Morgan, and Hattie McDaniel.) Even Amidst the racial stereotypes of the Hollywood of the 1930’s the humanity of Paul Robeson comes through, most especially in his definitive version of “Ol’ Man River”.

About The Crane House - Historical Background

Saved from demolition in 1995 through the efforts of Tom and Regina Hayes and scores of dedicated volunteers (dubbed the "Crane Crew"), the Stephen Crane House is Asbury Park's link to great American literature. This modest house was built about 1877 and was then known as "Arbutus Cottage". It was bought by widow Mary Helen Peck Crane in 1883. Stephen Crane (1871-1900), born in Newark, was the youngest of Mrs. Crane's fourteen children. He was enrolled in the Asbury Park Public School system, and it was there that he wrote his first fully-developed short story. Later he worked as a journalist, filing stories from Asbury Park for a New York newspaper. After spending his last summer at the Jersey shore in 1892, he left to begin in earnest his writing career in New York City. Three years later his second novel, his masterwork, The Red Badge of Courage, was published to great acclaim in America and Europe.
Despite his short life, Stephen Crane was a prolific essayist, poet, short story writer, novelist, and war correspondent. He died in Germany at the age of 28 and is buried in Hillside, New Jersey. Unfortunately, his birthplace in Newark was torn down many decades ago, and the Stephen Crane House in Asbury Park is the only remaining residence of the great author.

The entire first floor and four public rooms on the second floor serve as a museum dedicated to Stephen Crane. The building was purchased in 2001 by local resident Frank D'Alessandro in order to be maintained as a museum. That year the trustees had the aging building completely re-roofed in a style consistent with the original slate roof. The entire exterior has been expertly repainted by a prodigious local house painter extraordinaire, Kathleen Magee. The Asbury Park City Historian, Werner Baumgartner, serves as curator, keeping a watchful eye on rehabilitation efforts. Rehabilitation to the lecture room on the first floor is ongoing, thanks to the contributions of local residents. The generous donation given by Mr. Bruce Springsteen and friends has been of enormous help in making it possible for recitals, lectures, and poetry readings to take place there. An upcoming project is to make the first floor fully handicap accessible.
There were several literary events in early 2002 in cooperation with the Black Box Theater of downtown Asbury. The Stephen Crane House presented, on Edgar Allan Poe's birthday, January 19, an evening of works by or about the great short story writer and poet. A Vietnamese language movie, "The Scent of Green Papaya" was shown. Participants also sampled Vietnamese taste treats that evening. An acclaimed one-woman show on "Jane Eyre" was presented to an overflow audience. And a panel discussion about the history of "Gay Asbury Park" was conceived and produced by Maire Martello moderated by Michael Liberatore.

On November 1, 2001, (Stephen Crane's 130th birthday), we had a combination lecture, birthday party, and screening of MGM's 1951 production of The Red Badge of Courage, directed by the great John Huston. We also sponsored an essay contest at the Asbury Park Middle School to elicit essays entitled "What I Hope Asbury Park Will Be Like in 2021." The top three excellent essays were awarded cash prizes of $300, $200, and $100. Other cash prizes were awarded for essays judged to be of particular merit.
In June 2002, in recognition of Mr. Crane's work as a local journalist, we presented a monetary award to a young writer at Asbury Park High School. A cash prize was also awarded to another young journalist at the high school in honor of Stephen Crane's 131st birthday this past year.
Since the time that the Stephen Crane House was saved from demolition in 1995, the trustees have commissioned two successful plays on the life and works of Mr. Crane. We were aided in these endeavors by generous help from the Monmouth Council on the Arts. Written by writer/producer/story teller Midge Guerrera, performances were held at the local Methodist Church (the Crane family's parish) and in the house itself. The house has been the venue for various and sundry literary events, including a popular annual Halloween program, which this year featured the works of Edgar Allan Poe performed by Frank D'Alessandro and John and Maire Martello.
Working in concert with the Asbury Park Public Library, Asbury Park civic groups, and the local public school system, we hope to maintain a "literary meeting place", making the house available to local groups for any appropriate activity or gathering of a literary or artistic nature. Please call 732.775.5682 for further details.
Finally, the trustees plan to institute a great American writers series for each season and hope to have a website up and running soon. Stay tuned for announcements.

Contributions for the maintenance of the house are always greatly appreciated and acknowledged. Checks can be made out to:

You are cordially invited

Your generous donation is greatly appreciated.

All contributions are tax deductible. Contributors will be acknowledged in the credits of the film.