Should the City Declare the Baronet a Cultural Landmark to be preserved as a theater regardless of the owner? Please email your opinion  Opinions we've received - click

Petitions - See who is supporting the Baronet from near and far. Start a Petition

Asbury Partners' Letter to council member John Loffredo, re. its plans for the Baronet after the City takes the property for the Partners. Please note that the letter was sent to Loffredo and copied to deputy mayor Jim Bruno - ONLY. This speaks volumes about the sway the Partners' think they hold over the governing body.  Do Partners think Loffredo is more vulnerable because he makes his living selling real estate in Asbury Park? 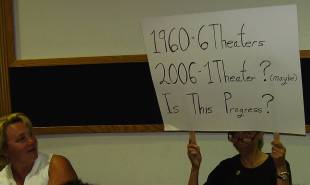 Council Meeting Notes from 8/16/06 - After a delicious sushi dinner at Taka, which occupies the ground floor of a building renovated and owned by Pat Fasano, the 'redeveloper', Larry Fishman, COO of Asbury Partners,  and his attorney, Alfred Faiella,  returned to city council chambers where the council was expected to vote to allow the Partners to eminent domain two of Fasano's properties: The 1913 Baronet Theater and the Fast Lane music club.

Apparently, Fishman (center of photo above) had sent council member John Loffredo a formal letter about his plans to develop entertainment venues.
Councilmember James Keady asked Loffredo if, in light of Asbury Partners' track record, would he like to see the letter "memorialized" in the form of a contract so that they would guarantee the things mentioned in the letter would actually happen. Loffredo agreed. Keady then asked if the council would be willing to table the vote on the Baronet to allow the Waterfront Redevelopment Subcommittee to negotiate the letter into a contract. The council voted unanimously to table the vote until Sept. 6th. Loffredo also asked Keady if given that guarantee would he be willing to vote to take the Baronet. Both Keady and Johnson said they would consider it.

Asbury Radio asked Faiella if the letter would have any legal weight. He declined to answer.