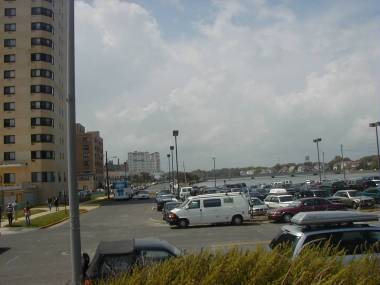 The Triangle - The Jewel in the Crown of AP's Redevelopment  Dir.       Home

Sold by City for $490,000 in 2006. Tidal Claim on 3/4 of property requires DEP/CAFRA approval. Why didn't CAFRA discover the claim during their due diligence on the major waterfront permit application? Was permit granted by rubber stamp? Should anyone be allowed to build a condo tower on tidal land?    Your Opinion

The Deal -  - click here - Note: the deed was transferred for $1, with the price to be determined later. Current Status   Resolution

The Triangle is a small lot at the ocean end of Deal Lake Drive, which was not included in the waterfront redevelopment plan. It was added later as part of the contract with Asbury Partners. (The tall building is Asbury Tower, senior housing.)

Pictured on the right, where the cars are parked, the lot sale will include the streets you can see, which are Ocean Ave and the east end of Deal Lake Drive that will be narrowed to accommodate the 8 - 10-story high rise planned for the Triangle. 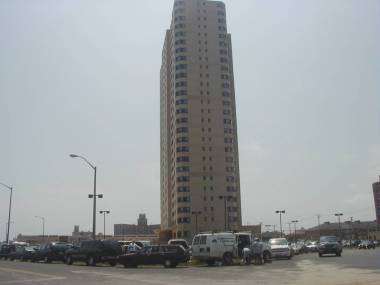 To bring the parking capacity up to DEP requirements, the Partners and the City of Asbury Park applied and was granted approval to build a 111-car parking lot - macadam - on the natural dune near the area used by fisherman now. The city's appraiser issued an appraisal on the approx. 19,000 sq ft. oceanfront site of $490,000. The Partners proffered one for $175,000. However, a resident and licensed/certified appraiser presented evidence to the city that the appraisers issuing these appraisals did not meet the city's own stated requirements and the appraisals were improperly done. City manager Terry Reidy and the council, including John Loffredo, asked the resident, Dan Sciannameo, MAI, to guide them in obtaining a just appraisal. Listen to Asbury Radio/ 88.1 FM/ AsburyRadio.com, from Sept. 1 Hour 1, Hour 2 for discussion of the status of this deal.  See also, Ordinance, Councilmember Loffredo's Editorial - Reaction to Loffredo's Editorial