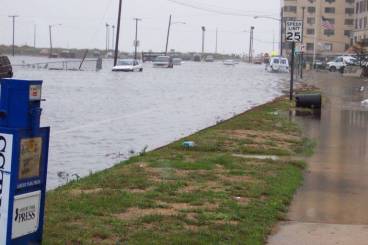 Future Site of Deal Lake Condo Tower - Pail Optional The Triangle at the ocean end of Deal Lake Drive, pictured here, to be sold to Asbury Partners by the City for   $400,000 to $490,000, will house some 100 families. Loch Arbour Mayor Bill Rosenblatt told news crews that overdevelopment is increasing flooding along the shoreline. 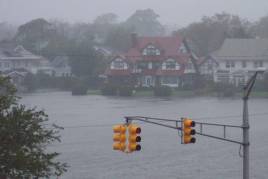 Guess he should know. (Below: Loch Arbour - photos courtesy of Carole Lord)

No Plans to Replace Deal Lake Boat Landing - The boat landing at the east end of Deal Lake was broken open for insertion of new storm drains. The landing site will house a 7' x 3' box, which will help to drain Sunset Lake as well (which is badly needed), city engineer Brian Grant told Asbury Radio. However, once the work is completed, Grant said the infrastructure plans only call for repairing the bulkhead not the boat landing. Residents on both sides of the Deal Lake should demand that the site be restored as close to the

original as possible. The landings lent charm and character to the lake.   Your reaction?  Ironically, two landings to the west are in dangerous ill-repair and have had to be fenced in. The eastern most landing was in exceptionally good shape.  10/1/05 - No work on the landing last week. What's up?