The Berkeley Carteret Hotel is Sold ~

Sources tell Asbury Radio that Amsterdam Hospitality Group of NY will operate the Berkeley Carteret Hotel for the investor group, who have thus far only been identified by the limited liability company they set up in the name of the hotel. According to its site, NYCHotels.com, Amsterdam runs hotels in NY, Los Angeles and Miami. Amsterdam just took on a new location in Charlotte, No. Carolina, for the Chetrit Group, which is part of the consortium that bought the Sears Tower. According to a press release, they bought "...the Adam's Mark and adjacent 202,000-square-foot Cameron Brown office building in July in partnership with other investors, including Arnold Yagoda. St. Louis-based commercial real estate firm HBE Corp. sold the properties for $47.5 million."

Sources say a NY hotel chain, specializing in boutique hotels, has bought the landmark for about $15 Mn. and plans to spend $25 Mn. on renovations and parking.

Oct. 11 Still No Name on Buyer of Asbury's Landmark Hotel - The new owner of the Berkeley Carteret Hotel is still unknown to city officials, city manager Terry Reidy said today. The hotel owner, Dr. Ahn, allowed the property to go to auction, where Asbury Partners, the redevelopment rights holder for the beachfront,  bid $10.5 million. Ahn had wanted $12 million. Today's Asbury Park Press reported today a bid of $17 million, but had no attribution for that information. Asbury Radio broke the news of the sale on Friday, Oct. 6.  As we reported, man identifying himself as Stuart Miller told city officials he was representing the anon buyer, although he declined to name his company or the buyer company.

Out & About in Asbury ~ Saturday night (Oct. 7) crowds filled the Wonder Bar for the Jersey Shore Jazz & Blues' Challenge, a Battle of the Bands - blues style - which Chuck Lampert looked to be winning by more than a few lengths, despite powerful performances by some of the competition.

Club-goers continued to speculate about the sale of the Berkeley, with some saying that Asbury Partners' retail developer, Madison Marquette, which is supposedly drawing plans for renovating the entire waterfront (an area the outfit's website describes as 260 - not 56 - acres), also was aggressively bidding on the circa 1925 hotel. Property professionals say Asbury Partners itself bid $10.5Mn on the hotel's asking price of $12 Mn. One might puzzle over why the Partners would be betting against their own subcontractor.

Many locals who had heard that Madison Marquette was doing a feasibility study before a decision to commit to being the waterfront retail developer for Asbury Park's beach and lake fronts, may be shocked to see the relationship and commitment expressed on MM's site as a done deal. Click here to read.

Meanwhile, plans to re-open the Fast Lane, next to the Baronet, on 4th Ave. are said to be going ahead.

Friday Night (Oct. 6) Inside  the Berkeley Carteret life went on as usual with eager musicians signing their names on the big white pad for Steve and Cook's open mic, despite reports that Asbury Park's last landmark hotel has been sold.  Word spread 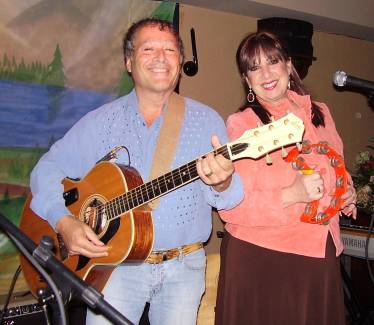 yesterday morning that the new owners, a hotel chain whose name is yet unknown, has cancelled all reservations after Oct. 31, and will close the 250-room hotel for renovations thru most of 2007.  (Rumors say a man identifying himself as Stuart Miller said he was representing the anon buyer, while others simply described the buyers as looking "like Syrians." There is a Stuart Miller, who is CEO of Lannar Homes, a large residential builder.)

(Above) Lip Man & The Lips, Mark & Joan Lipman, who met on the boardwalk in front of Ho-Jo's back in the day, kept their date with fans despite 4-hour, storm-related delays getting up from Palm Beach, Fla. yesterday. The couple opened their number with "Asbury Radio", the theme song they wrote for us, after waiting their turn while singers, guitarists and keyboard players, from 16 to 60 offered up tunes old and new. Co-host Cookie Smith, of Loch Arbour, said someone with the new owner, who introduced himself only as "Jay," wants to keep the Friday night feature, which draws about 50 to 100 guests to the otherwise underused lounge. "Guacamole Dip" was a hit of the night!!