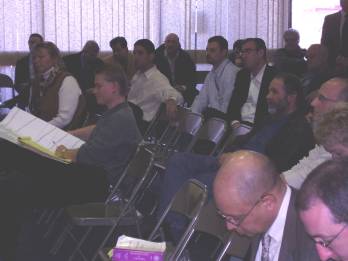 Joe D'Andrea, a resident, quoted Larry Fishman, COO of Asbury Partners, from a description of what he said was lacking from proposals brought to him by non-profits, art groups and other would-be tenants for his waterfront buildings. The list included proof of financial resources. D'Andrea suggested the City hold Asbury Partners to the same accountability they are holding their tenants to.

Skip Bernstein, a photographer and web site entrepreneur, drew laughter when he asked Larry Fishman if he needed approval from the State Historic Preservation Office (SHPO) to replace the light bulbs in the "Greetings from Asbury Park" sign on the Convention Hall. Fishman said he doubted the SHPO office would approve having the sign at all.

Bernstein asked if the Partners had considered operating the Convention Hall at a break even in consideration of its ability to attract business elsewhere on the boardwalk.

Fishman said he and his partners are "well aware that Convention Hall will never throw a profit," yet have put "substantial dollars" into the building because of its role as an anchor on the waterfront and ability to attract visitors.

Werner Baumgartner, the city's historian who was barred from formally representing the city by former city manager, a principal architect of the current redevelopment agreement, and confessed extortionist Terrance Weldon, questioned the protracted deadlines for renovation of the buildings. Referring to the Casino building, he asked, "Why demolish the arena portion? Why not simply disassemble it on site and then reassemble it right there." The cost, he said, would be greatly reduced, as would the time to restore the building. Mr. Baumgartner cited the same approach to the successful moving of London Bridge.

Asbury Radio asked the council if the new agreement, which the council resolved to begin drafting between Asbury Partners and the City (see story), will supersede the current agreement -- The Amended Restated Redevelopment Agreement.

The City's redevelopment attorney, Jimmy Aaron, said it would probably be an amendment to the current agreement.

So, Asbury Radio asked if the escape clause, which waives Asbury Partners' obligation to deadlines if there are any lawsuits in process, would remain in force.

Mr. Aaron said that clause could be negotiated, in the new agreement.

Asbury Radio asked why the City should be debating the continuation of that clause. "Isn't this City in the driver’s seat…?" we asked. Then we asked Mr. Aaron directly to explain why he directed his client, the City of Asbury Park, to sign this agreement to begin with, since at the time of that signing there were at least six lawsuits pending.  Mr. Aaron seemed speechless, saying nothing as he stared back at the questioner. When we pressed for an answer, Mr. Aaron said he didn’t have to answer to us.

He said the matter was between the City and its attorney, a matter of "attorney/client privilege."

We also asked if Mr. Fishman had provided proof of its source of reconstruction financing as part of the materials presented Friday. The council said the Partners had not done so and that was among the requested items.

We asked also if the Partners had presented their financial accounting of their operation of the Convention Hall to date, as part of this review. They had not.

Jerry Scarano, a city property owner, said the Council should set the timelines for when it feels the buildings should be renovated -- not ask the Partners for their timelines. And the timelines should be monitored closely.

Tommy DeSeno, an attorney in private practice and the compensation attorney for the City, asked that the council declare the Partners in default, in order to start the clock, which would make a stronger position for the City. "Default doesn’t kick the partners off (the project), it just starts the clock," he said.

Mr. Aaron said, "Tommy, your reading of the agreement is very good. (The point) is part of the advice I would give my client." As such, he said, the analysis would be part of attorney client privilege preventing him from discussing it further in public.